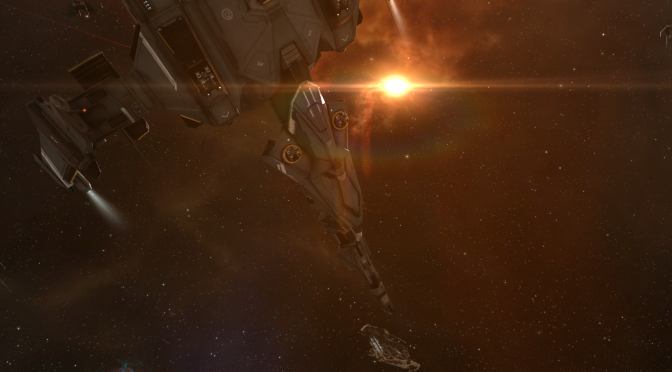 I just looked at this little blog and noticed that it had been six whole months since I had posted here. Can you imagine, six whole months? A little bit of a shock, because it did not feel like six months to me.

Anyhow. There is a reason why I’ve been essentially quiet here: I was pretty damn busy. In my last post I mentioned Black Shark Cult, a newbie-friendly lowsec PvP corp I was getting more and more involved in. And yes, I still I am very much involved. I’ve been recruiting like crazy – our corp grew from 15 to about 90 characters – and I started FCing and writing about Solo PvP for our in-corp guides.
Anyone who has ever taken up a leadership role in an active EVE corporation will know that this kind of commitment takes time. Posting on our Discord, answering questions, luring people our way from Reddit and other forums, preparing for fleets, engaging other CalMil leadership to coordinate our actions…

It’s been a crazy but cool six months in Black Shark Cult, and it’s getting cooler every day. We’ve reached the point where our guys help flip systems and our presence actually makes a real difference. Our guerilla playstyle has worked pretty well until now, and we’re looking to ramp that up even more now we have numbers and doctrines.

Another thing I’ve been doing is writing. Now I can hear you say it: “Writing, you say? You haven’t written a word here in six months!?”
And you would be correct. I did not write for Capsule Ejected…

However, I did write for Crossing Zebras – two articles published and a third in the editorial queue, with more ideas brewing. And that has been so cool! Have a look if you missed them:

Anyway. I’ll revive this blog for real this time. Expect to read more about Black Shark, faction warfare, and EVE media and politics in the coming months!